The ESGO online Elections to ESGO Council ARE OPEN from August 28 to October 1, 2017.

The Society members with voting rights (European regular members/individual professionals with active paid membership for 2017) have been approached to cast their vote via the personalized electoral email.

-> Click here to view the final slate of candidates for a position in the ESGO Council 2017-2021. 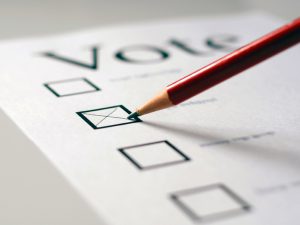 ESGO Officers are elected by the ESGO Council, while ESGO Council members are chosen by a general election amongst ESGO members. All ESGO regular members (i.e., European members) are eligible to be nominated, vote and hold elective office or committee positions.

The Nomination Committee, consisting of the President-Elect, the President and the outgoing Past President, prepared the final slate of candidates ensuring a balanced representation of the different geographic regions of Europe in the future Council.

We invite all European eligible ESGO members with activated ESGO membership to cast the vote via the voting email.

Voting will be completed electronically via a voting platform. Society members with voting rights have been approached to cast their vote. If you have not received the electoral webmail, kindly let us know at esgo.elections@esgomail.org

The candidate who will receive the simple majority of votes will be declared elected. In the case of a tie, the Nominating Committee will make the final decision. All votes are be confidential.

The voting platform will be open from Monday, August 28 until Sunday, October 1, 2017.

Results of the ESGO Council elections will be announced at the ESGO 2017 Congress in Vienna, on November 4-7, 2017.

State of the Art Conference